We all know the stock injectors on the GM 1.4T LUV/LUJ engine are just WAY too small (26LB) to support anything past a stock turbo pump gas tune, so it's really common for people to upgrade injectors. In this article, we'll go over all the available options on the market, which ones are great, which ones are not so great, and why. Plus- we're dropping a bombshell and announcing a new SUPER LOW COST fuel injector upgrade that has been FULLY tested and is FULLY supported RIGHT NOW by BNR- we're talking under $140.00 for a set of 4. Keep reading!

The stock FPCM in the Sonic/Cruze 1.4T will not allow any additional fuel pressure to be commanded in the ECM, and will max out at around 55PSI at the highest point, but usually run in the low 50s. This can be manipulated by using a BNR FPCM, which will allow a max fuel pressure of 65PSI (at 70PSI the pressure relief valve on the fuel rail starts to leak).

Back in the early days of tuning the GM 1.4T, all the major tuning companies defaulted to old reliable. The Bosch Green Giant 42LB injector. Old tech, but reliable tech. It worked. No one knew of anything better or different, so that's what we ran. These are still widely used and available from almost all major tuning companies as they are the lowest cost "Entry" level injector. These injectors can support around 200-210WHP at stock pressure. With a BNR FPCM and taking the fuel pressure to 65PSI these injectors can flow 51LB, and support a good bit more, in the area of 230WHP on pump gas. Less on E85.

A few years after the Green Giants, BNR introduced the BNR 52LB Injector. These are Flow Matched EV14 Bosch Injectors, with upgraded internals designed to handle E85. Not only do they use the very latest in fuel injector technology for an amazing spray pattern / atomization, but they have the ability to pulse SUPER low, making them perfect for the 1.4T's super tiny fuel requirements at low throttle inputs and idle. Smooth idle, great throttle response, and plenty of fueling overhead for up to 250WHP on pump gas. Flow Matching them means that each injector will flow within 2% of the rest of the injectors in the set. It is possible to have a high percentage discrepancy with non-flow matched injectors, meaning you could have one injector that is several % leaner or richer than the rest in the set. This can result in one cylinder receiving significantly less fuel than the other 3, and could lead to engine damage on high power builds or builds that have extremely aggressive tuning where everything needs to work perfectly. For this reason, all BNR brand injectors are sold in flow matched sets, with flow data provided. The downside to these injectors is cost. They do cost more than other options on the market. However, if you want to maximize safety and performance at the same time for the given build, flow matched is the way to go. These injectors are also available in 60LB, which when coupled with a BNR FPCM can flow as high as 75LB.

The next option on the market are the Siemens Deka 60s and 80s. They're old tech from 1990s and early 2000s Jeep/Dodge and some GM V8 motors.These injectors are not supported by BNR. The main reason for this, contrary to popular belief, is not due to the poor spray pattern, which is definitely a concern, it's due to the high minimum pulse width. Pulse width is how long the injector stays open to spray fuel when the engine computer tells it to spray. On the GM 1.4T, idle, deceleration, and low throttle input fueling could command as low as .8ms (milliseconds) of fuel to be sprayed. The Deka 60s can only spray as fast as 1.5ms, literally almost DOUBLE the fuel requested by the ECM. Because of this, at stock fuel pressure these injectors will NEVER idle well, they will have horrible part throttle response, and transient fueling problems such as hesitation or bucking can even occur due to the over fueling. It's also not uncommon to set a check engine light because of the rich condition caused by the excess fuel the engine computer doesn't want. One of our competitors is supporting this injector by running extremely low fuel pressure (10psi of fuel pressure) in these situations to Band-Aid the injector into playing nice, but we do not believe in doing this. You should run an injector that is designed to work under the conditions you will be putting it through. There are plenty of other injectors that do the job better, and the overwhelming reason people tell us they are wanting to use these injectors is because they are cheap. The Dekas also come in 80LB which has even worse idle and low throttle manners, but more overhead. 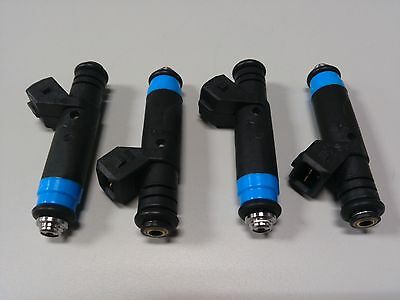 At BNR we love to support the community. We've heard you loud and clear that you want a cheap injector option for that stock turbo E85 build, or that 19PSI mild boost turbo upgrade. Because of this we did A LOT of digging. We've been searching for over a year for a suitable cheap injector to tell the Sonic / Cruze guys about. And we found it. It's been thoroughly tested and is BNR approved as an alternative to the 42LB green giants and the bargain bin Dekas. And here's the crazy part- We aren't even going to sell them. You can get them on amazon, rockauto, your local AutoZone, almost ANY auto parts store should have these injectors in stock. And they're DIRT CHEAP. $25.00 each is the going rate at the time of this article. They are ACDelco part number 2173076 the GM part number is 12578722 or 12598842. You will also need to grab Jetronic to USCAR adapters (EV1 to EV6/EV14) which run under $20.00 for a set on ebay, amazon, or any fuel injector dealer's website. These are 40LB Bosch EV14 fuel injectors that will work perfectly on a sub 220WHP pump gas build, or around 200WHP on E85. Coupled with a BNR FPCM these new ACDelco injectors will support 240WHP on pump gas, 220WHP on E85. You can also grab these injectors from Tom Rominski at Crate Engine Depot using GM 12598842.

These new injectors are FULLY supported by BNR. We will tune you for these injectors starting TODAY. If you are a BNR customer and you are looking for a dirt cheap injector to upgrade your stock ones, the ACDelco 2173076 is the way to go.