In 2017 I set out to get a car that I could modify and make peoples heads turn. So here it is my 2017 chevy sonic RS 6 speed manual. The goal here wasn’t a crazy looking car but more of a “whoa what’s done to that thing?” reaction. Boy, do I get that and then some. With an extensive list of go-fast parts this car has done 57 laps at Watkins Glen International and more auto cross events than id care to count. Competing in SCCA solo SMF class this car places in the top in nearly every event- up against cars with nearly no mod restrictions.

Ultra-racing front brace (the one under the car)

Over the top performance:

Catch can off wish app

Working with Jerry at BNR to make all these parts run smoothly together has been such an easy process. Which is an amazing feat. With that many things that need a tune change he’s done an amazing job with each update. He’s done so much work to get me a dialed in tune for days at the track, from changing boost levels and throttle response to cooling fan logic and fuel cooling the cylinders. This car is an absolute animal. The v3 autocal quickly changes tunes in just a few moments and can store several at a time. The color display can read data live off the car and allow me to always keep an eye on the engine data. It doubles are a multi system code reader with a full code definition. I’m so glad I choose him to tune my car. After 37,000 miles and countless times at the track without issue, his tune is proven to give me the FULLY custom tune, power, and enjoyment that was well worth the money. Its amazing how a small, little known eco car could be turned into such a monster.

The gtx250 has been the greatest mod I’ve done. The power it makes has surpassed all expectations. I can’t tell you enough the night and day difference the power that thing makes. If you have any doubts let me assure you its well worth the money. Capable of 28psi this turbo spools fast and pulls like a freight train. Racing cars with way more hp, I still pull ahead. This race proven turbo won’t leave you hanging.

The ls7 coil kit is a total show piece. I’m always getting compliments on the quality and look. But this isn’t just for show. Producing way more voltage than a factory log style coil could ever make the car runs so much smoother. The coils sit high over the valve cover giving it space to breathe and keep cool which is probably why the factory ones fail so much.  Building this car has been so much fun. The Sonic/Cruze community has earned me some good friends and fun times in the shop, even more at the track. It’s definitely been an adventure that I would do again. 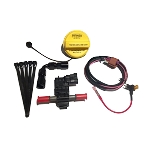